You won't be disappointed

About the Mantis St Helena. It is the best accommodation on the island without question

Great in every way is, from me, a strong endorsement. I've stayed in various lodgings in well over 100 countries and, given its location on St Helena, the Mantis has exceeded my every expectation.

At this writing, the manager is Matt Joshua who I first met at the airport. He was there to personally greet me and other arriving passengers-perhaps because three members of the Mantis management team were on the same flight. In any event, I felt like an underserved VIP.

The rest of the staff is universally welcoming and efficient.

Formerly the Jamestown Hotel (there is still a phantom WiFi signal by that name floating in the ether that nobody seems to be able to locate), the Mantis has eight "Heritage Rooms." I am in #4. My key fob (leave it at Reception when you leave the hotel, please) is fashioned from portions of the some of the old floorboards which had to be replaced during remodeling. The Heritage Rooms were, in 1774, Officer's Barracks; the site has a new "wing" in the back containing 22 "contemporary" more modern lodgings. The entire property is non-smoking.

As for internet, the WiFi in Room 4 is excellent which is also the case in the lobby, the bar and the courtyard. There is no signal in the dining room due to thick walls between it and the router. It's free-up to a point. Ask for details based upon your rate. That is not the case elsewhere on St Helena. Several spots have WiFi but there is a charge for it and it is slow…at least as of February 2018.

If you have a choice of rooms, I recommend one of the Heritage rooms but I suspect you won't be disappointed either way.

The ceiling in my room is about 15 feet high but the air conditioning unit makes short work of refreshing and cooling the air inside. There is a king bed with new linens a 32" Samsung on the wall over a 6-foot desk that offers work space and a home for the hot water kettle and Nescafe packets for morning coffee or tea. There is a small fridge but no mini-bar. 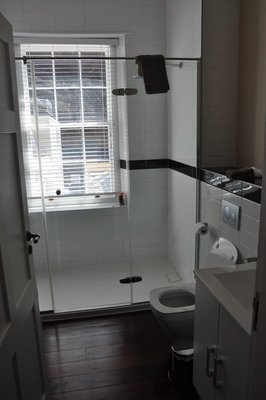 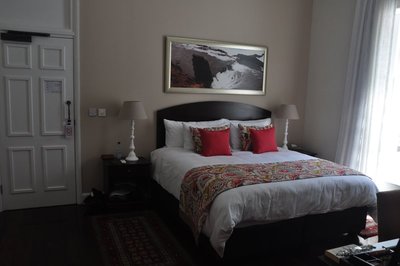 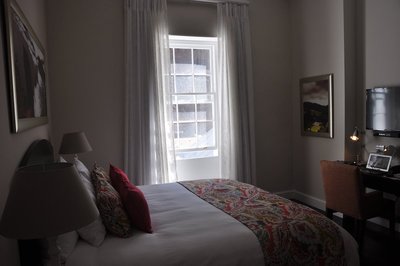 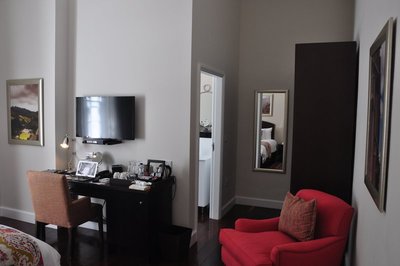 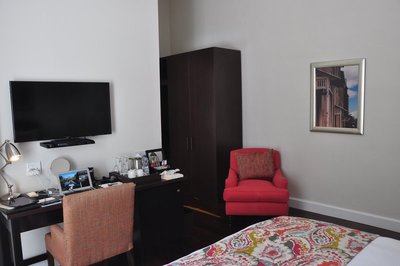 My bathroom sports an oversized shower (no tub) with a rain head, new fixtures and plumbing and plenty of counter space for toiletries. Shampoo, conditioner, body wash and body lotion ("Just So Pure Spa") and bar soap are provided. The towels are thick and new-at least as of this writing. The lighting is good, supplemented by a large window in the shower covered by adjustable slats. I don't much care for the fact that the exhaust fan is triggered by a motion detector and it runs for three and a half minutes even when I wish it didn't until it figures out that I have left and it can rest.

There is no closet but, instead, an oversized wardrobe with room for folded and hanging clothes. It also contains a nice robe, slippers and an in-room combination safe large enough for a laptop. Three electric outlets at the desk are of the Type G three-pronged UK variety with one other being the Type M used in South Africa. One USB charging port is offered as well. Current is 240 volts, 50 Hz (the same as South Africa and the UK) so, Americans, make sure that whatever you plug in (bring an adapter for that purpose) says 100-240V. If that 204V marker isn't there you'll burn out your device.

There is no electric outlet in the bathroom but a pair of outlets exist just outside for the hair dryer which you can find on a shelf in the wardrobe. For the dryer and/or an electric razor, you may have to stretch the cord a bit. There is a magnifying makeup mirror on the desk which also houses a desk lamp and a telephone.

Art around the hotel is mainly photography of spots around Jamestown and the rest of the island. The lobby offers a sitting area that will accommodate about a dozen guests.

Breakfast is as you would expect, either continental or from the menu and service is prompt and crisp and friendly. Don't worry, they insist, about the floor which bounces a bit much for my taste whenever someone walks by. The building is very old but, the assure me, won't fall down. For lunch or dinner you can opt to dine at the bar or outside on the inside courtyard. The kitchen closes at 9:00.

The bar offers five stools, lots of bottled beer (including for some reason Budweiser tall cans which nobody ordered during my week here), a full complement of liquor and enough wine variety to satisfy all but wine snobs. There is even a bit of prosecco and champagne. If I had it to do over again I would grab some alcohol at duty free on the way to the island.

If you like a particular variety sold only by the bottle but only want a glass or two just ask them to mark the label for you and set it aside, inside the cooler or not, for your next time in. JJ, our bartender during the evening hours this week, was more than happy to oblige.

Be aware that due to the remote nature of this island there will be, from time to time, shortages of this or that. When there are no eggs on the island, there are no eggs for anyone. Limited freezer space at the Mantis means it will someday be no exception. They ran out of a couple of things while I was here but nothing significant.

The Mantis accepts credit cards (AMEX, Visa, MasterCard and Maestro), British Pounds and St. Helena Pounds but not US Dollars of Euros which must be changed. The Bank up the street handles that. There are, at this writing (February 2018) no ATMs of Cash Points anywhere on the island. I suspect that will change sooner rather than later but who knows.

There is same day laundry but no dry cleaning. The TV offerings are sub-par for American tastes but that is true most everywhere around the world. The is SKY news but, in my room for some reason, no BBC News. They have History, Nat Geo, Cartoon, Discovery, Disney JR, E!, four offering entertainment and three or more with "sport."

My room (no photos on the website) which faces West through an unfortunately filthy window toward the courtyard and the steep rock wall of Half Tree Hollow and the forbidding Jacobs Ladder, offers one overstuffed chair as side furniture. Room three-it was open one day when housekeeping was inside and is featured on the website, has at least two overstuffed chairs and faces Main Street. I didn't venture inside. The photographs on the website mantissthelena.com are all accurate and up to date. For some reason there are no photographs of the courtyard; an oversight to be addressed as many of us liked to linger there for communal cocktails and conversation under umbrellas while being serenaded by the many birds which call St Helena home. 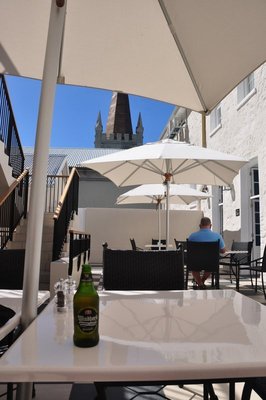 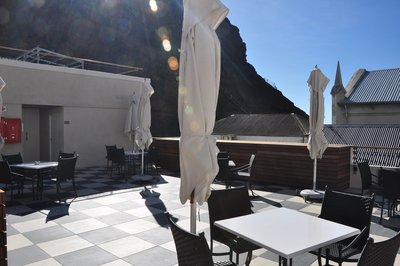 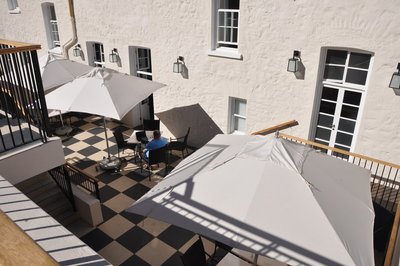 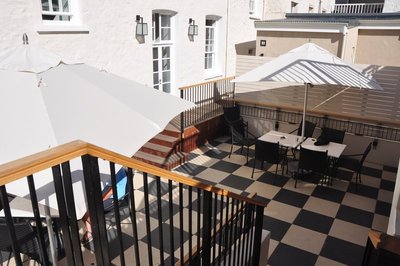 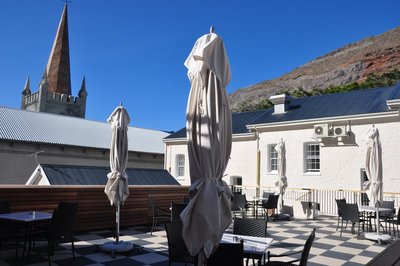 Wheelchair access is available for parts of the dining room, bar, courtyard and a third of the Contemporary Rooms but not the Heritage Rooms or reception. The hotel is built on a sloping hill and the main floor has been necessarily divided into three levels with ramp access for the middle level. Not perfect but not bad either.

Very nice accommodations! Overall, very inviting with all necessary needs covered. They should hire you on the Saint's Marketing Team!