As instructed last night, I this morning report at nine o'clock straight up to the office of the St Helena National Trust for a tour, pre-booked, entitled: Diana's Peak & Coffee Plantation Tour. Here is the description: "This morning you will join the St Helena National Trust for a guided walk through Diana's Peak National Park. At 823m, the summit of Diana's Peak is the highest point on the island, providing spectacular views over the surrounding landscapes En-route you will also observe St Helena's endemic flora & fauna, and learn about the conservation efforts surrounding them. After lunch, enjoy a tour of the coffee plantation at Rosemary Gate Coffee Estate, followed by refreshments and local coffee."

At least, that's what it said.

The nice lady at the National Trust office just across Main Street and up a bit, Amanda (Mandy), seemed a bit put out with me before I could even say Hello. She peppered me with questions that I was unprepared to answer such as, what time are you to be dropped off at the Coffee Estate? What is it, exactly that you expect to see, etc.? She was angry at me, at the St Helena Tourist Office, at Anthony and you too had you been there. Benjie was introduced to me as my driver guide, but he was quite the introvert with nothing much to say. I suggested that a call to Anthony could sort out any questions she might have but she didn't know his number and had to way to find out what it was. I walked across the street and asked the hotel for his number but when I returned she had washed her hands of me and so it was just me and silent Benjie to figure things out.

The bad news is that there was no lunch and there was no refreshment and no local coffee to drink. After a good long time, Benjie did come around but I wasn't the best listener as I was mightily frightened as he took the switchbacks with a higher speed that I would have thought safe in our slightly seedy Suzuki with a mostly broken passenger seat and torn rear window. 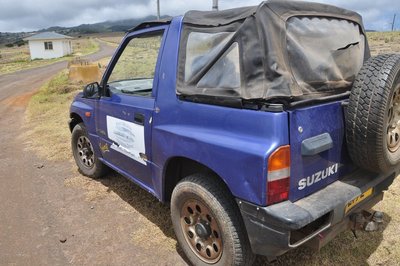 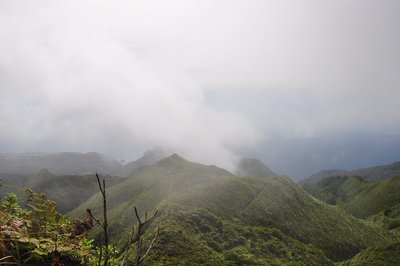 The good news is that I had a great day in spite of them.

After we safely arrived two thirds of the way up the road to the top of Diana's Peak we had gone as far as a vehicle could take us and we set out over a well-maintained path and some new/some old staircases for our climb to the top. There are actually three peaks: Mount Actaeon, Diana's Peak (the center of the three) and Cuckold's Point. Mostly shrouded in fog and low cloud this morning, the view came and went in a spectacular fashion. Benjie pointed out many species of flora & fauna (check that off) and lots and lots and lots of varieties of insects, none of them this morning in the mood, thankfully, to bite. 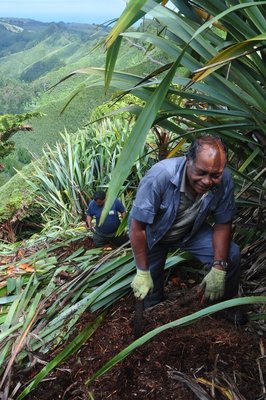 We ran across a crew of Saints with machetes hacking away at flax plants which have overgrown not only this mountain but also a good bit of the island. Brought here and not native, the flax plants were grown so that ships calling on St Helena could replenish their rope supplies but using these plants to braid new ones. This turned into an industry that was a major export back home to England until the Royal Post stopped requiring string to be used to secure packages for the Royal Mail. The market for exported string collapsed, the jobs vanished and the plants thrived. A pest today, this crew hacks away. My guess is that will have eradicated this plant from St Helena after about 500 years-if they work straight through. 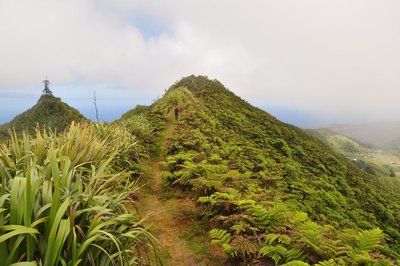 Halley's Mount is included on this hike and is the spot where Halley of Comet fame came to scout the heavens. I am told-not by Benjie-that he was often frustrated by the same thing that surrounds me from time to time this morning: cloud cover.

We hike back down, climb into the Suzuki and race to Deadwood Plain in hopes of finding a Wirebird nest. Benjie wants to show me some Wirebird chicks and I am keen to see them but, alas, we could locate no nests.

We raced next to the Coffee Plantation where I was, at about 12:15, dropped down the hill and outside the gate with a succinct goodbye. On the way I inquired about the promised lunch but Benjie said there was none to be had on this part of the island. I knew I was to be picked up at the Coffee Plantation but not until 2:30 (or, as they say here and in the UK, Half Two.) 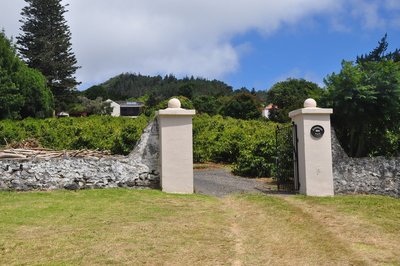 The intrepid traveler, I marched through Rosemary's Gate and up the well-tended drive to the top where a well-tended cottage sits beside a small coffee pulping, composting, fermenting and washing facility abuts a drying spot, grading and sorting shed and roasting room. A grinding machine finishes this lineup.

I am eventually greeted (he didn't hear me arrive) by proprietor Bill who, along with his wife, own this operation which is surrounded-as you would expect-by what I would estimate to be less than two acres of Arabica coffee from seedlings to mature plants. 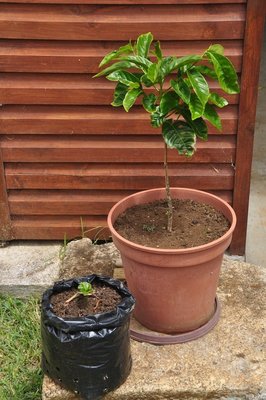 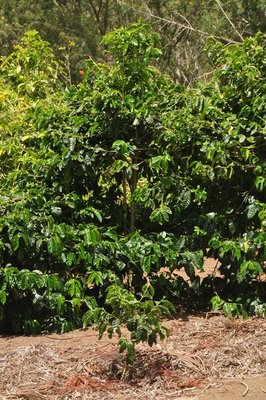 Their life is full: They weed and mulch constantly. Coffee plant flowering normally takes place around this time each year. The cherry develops over an eight month span until it is red and ripe and ready to be picked, pulped, dried, etc. Bill had plenty of beans in the drying phase and was roasting them when they reached the correct moisture content (11%). They don't get much yield; just enough to fulfill the needs of their coffee shop on Jamestown's waterfront and precious few bags for sale. At ten UK or St Helena pounds per small 125 gram bag, this may be the world's most expensive coffee. It is quite good.

As our tour was winding up, Bill face took on a concerned expression as he said, "Oh, my; I have nearly forgotten to run and get my eggs allotment." I asked if I could come along as it was still early, only about 1:30 and my pickup was still an hour away. "Hop in," was his reply and we drove down the valley, around the hairpin turns and in short order arrived at an egg producers facility where we unlatched the gate, opened a shed door, grabbed four dozen eggs, scurried them back through the gate and into the back of the car so we could zip back up the hill, through Rosemary's Gate and back to his cottage where he could stow his precious cargo. His wife-Jane I think-was away at the coffee shop down in Jamestown and she would not have been pleased, he implied, if he had forgotten these precious eggs. 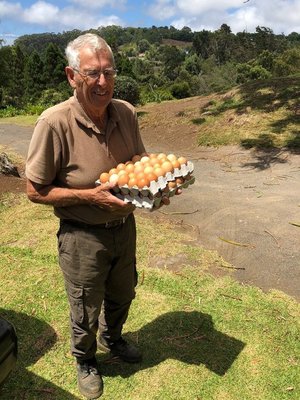 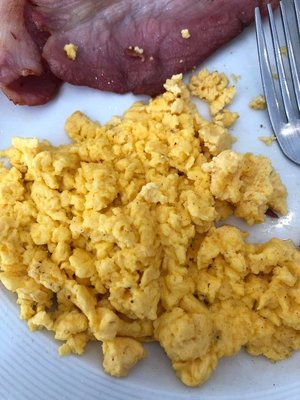 We have been out of eggs at the Mantis. I look longingly at Mike's supply and consider offering to buy a few but I don't. I doubt he would have parted with them in any event.

He did agree to grind three bags of coffee for me and send them down to the coffee shop for pickup tomorrow morning before I leave the island.

At the appointed time, Anthony (bless him: he is the rock on this rock) arrives with Mike and Taylor-my by now best friends in the entire world-and we're off to our next stop: The Distillery.

Paul runs this one-man shop. He makes a cactus-based liquor (think tequila but not), a spiced rum, gin, a coffee liquor, and even some wine. St Helena's Breaking Bad Walter White, Paul traveled to Germany to get his impressive still, took two weeks of lessons from them and then spent a good bit of time watching YouTube until he mastered his craft. We sampled it all but I was concerned since I had only a tiny bite of toast for breakfast this morning and thought it a bad idea to be tasting that much alcohol on an empty stomach. 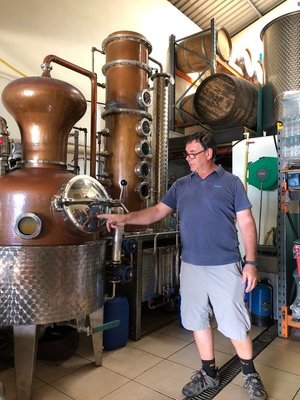 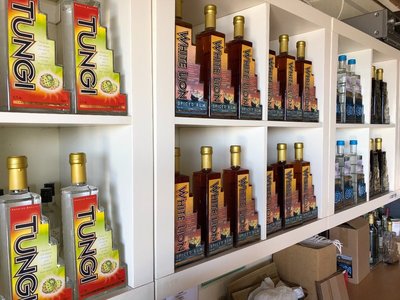 Anthony saw my concern and volunteered to run home and make me a snack. He soon returned with a fried egg sandwich (again, recall that the fanciest hotel on the island cannot obtain eggs), some crackers and even a bit of cake for dessert. Fortunately, Anthony lives virtually next door.

Taylor and Mike and I were soon joined by Ingus, Sasha, Rosie, Martin and Matt from the Mantis and we all merrily tasted and laughed and enjoyed the magnificent view from this entrepreneurial distillery halfway up a mountain on an island in the middle of the far reaches of the Atlantic Ocean.

Anthony, bless him again, collected us (actually we sort of collected him by walking over to what we thought was his house but was really somebody else's) and drove us back to Jamestown. Paul told us that his wife, Sally, ran the Standard-one of two pubs in Jamestown. The three of us simultaneously got the bright idea to visit the Standard on the way home to the Mantis for a Windhoek Lager and some local color. Sally wasn't on duty yet when we arrived but we enjoyed a beer and then, for good measure, walked across the street for another at The White Horse, the other pub in Jamestown. 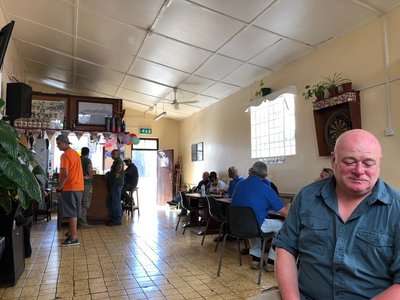 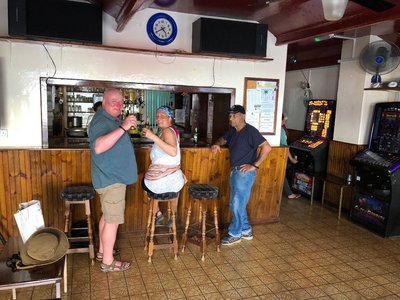 The conversation at The White Horse was better than at the Standard but both are recommended.

Back at the Mantis we decided to dine in. The starters on the Mantis menu are enormous; one need not order a main meal-but we did. And, we topped it off with some vanilla ice cream topped off by, for one order, Paul's spiced rum and for the other order, Paul's coffee liquor.

Amanda of the National Trust long forgotten, it was a fine final day on St Helena.

Looks like you got a lot done in the Final Day!
Travel Safe!