Imagine a mere speck of a place surrounded by water with the nearest land some seven hundred miles away. Seven hundred miles is the distance from Kansas City to Cleveland or Charleston or Akron. And then imagine that that place is an even tinier spec: Ascension Island.

To reach a continent, you would have to travel further: Luanda, Angola is closest at 1369 miles, about the same as from Kansas City to Mexico City. Windhoek, Namibia-the spot where my aircraft refueled but did not take on or discharge passengers, is 1556 miles away…KC to Acapulco. Inhabiting those empty miles is absolutely nothing but salt water and alabaster sky.

St Helena is a forbidding and intimidating jagged rock of a place where a man like me comes when he has already been everywhere else. It is only 47 square miles big. Kansas City is 319 square miles in size. St Helena-the entire rock-is equivalent in size to two thirds of Olathe.

On days at home when I walk 10 miles, it is the same as walking coast to coast East to West; North to South would be but half of that. Here the major and significant exception would be that I would have to have climbed up and back down Diana's Peak which soars 2684 feet above sea level. That I am, obviously, incapable of doing. But, then, I did not come all this way to hike. 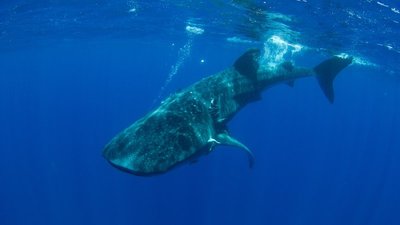 I feel safer because I am not a plankton.

I feel afraid because I am in the open sea with the largest fish and shark in earth's oceans, the (up to) 40-foot whale shark. Slowly swimming close to the surface of the water, mouths agape, solitary whale sharks scoop up tiny plants called plankton-along with whatever other animals and small fish that happen to be in their path. In this process known as filter feeding, the whale shark uses its enormous mouth as a food funnel.

I meet up with Brits Taylor and Mike in the lobby of the Mantis Hotel at 8:15 and we are soon picked up by Paul and joined moments later by still another Brit named Stuart. We pile into a pickup truck type vehicle piled high with dive gear and drive a half mile or so to the jetty where Anthony and his wife Maria arrive in a large inflatable boat. We're off from James Bay, around Rupert's Bay, around Sugar Loaf Point and barely into Flagstaff Bay when Maria spots a dorsal fin. 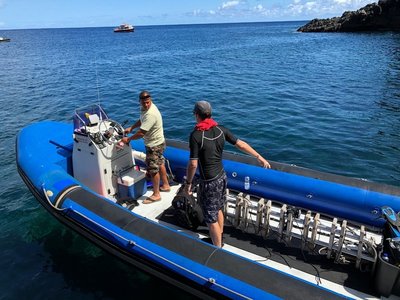 We are briefed: don't approach nor touch the whales; if they approach you do your best to avoid contact. When swimming with them, stay five meters away. Watch out for their tails. We are reminded of divers' and snorkelers' hand signals for "I'm OK," "I'm ready to get back on the boat," and "Help." And then, over the side of the inflatable we go.

The whale shark didn't attend the briefing. Unconcerned about us coming too close, she glided here and there paying no mind that there were four tourists and one guide in the water and proper distance was to be maintained. While I can confirm that I never did touch her I confess that I was much closer than proscribed…but it was her fault rather than mine.

She is longer than our boat so Anthony guesses her to be ten meters in length. Paul says she is pregnant. I say she is beautiful, peaceful, intimidating yet aloof. Breathing through a snorkel I find myself taking more breaths per minute than I normally would as this is a rush. After twenty minutes or so she glides away and we all pile back into the boat.

Anthony tells us that divers he hosted last week had been in the water with whale sharks many times but usually for a span of a couple of minutes when, unable to keep up, they would climb back into the boat to hurry ahead to make another two minute rendezvous. Not here. The whale sharks here circle and loiter. The idea of keeping up with them is replaced by keeping out of their way.

We motor for five minutes or so and we spot a pair. Back in the water we go and the earlier experience is repeated. We glide with them, over them, around them being mindful to keep our distance when possible…it often is not possible. I watch out for their tails and, again, don't touch.

Their mouths, alternately gaping and sealed are enormous. Yes, they could swallow you up but that does not occur to them. Their more aggressive shark relatives would disown them for what, for us, endears them.

I tire so, before the others, head back to the inflatable. Once on board one of this slow moving pair glides beneath us, then around us and then bumps us ignoring the rules. It is magic.

Paul has been in the water with us with a camera. My fingers are crossed that he has some great shots. I determined that my goal was to experience this rather than record it so my cameras, both the Nikon and the iPhone, never came out.

The word whale in their name refers to size rather than species because this fish has two pairs of five gills and so is not a mammal as are air-breathing "whales." Small eyes seem to follow you and then become bored with you.

Scientists say they have a lifespan of about 70 years and weigh twenty tons to much more.

The whale shark's head is flat with a blunt snout over its mouth. Brown and white spots adorn its back and sides over a white belly. There are two dorsal fins ahead of its large "dual-lobbed caudal" tail. Males sport one penis and then another slightly behind the first.

Each of the whale sharks we swam with was accompanied by twenty to thirty foot-long pilot fish which attach to the giant fish and clean him or her up by eating ectoparasites that congregate on the skin of the whale shark. They do a fine job, I would say, as these seem quite clean to me and, believe me, I was close enough to do an admirable inspection.

Like me, whale sharks prefer warm waters and migrate to maintain a presence in friendly confines. In 2011, reports say, more than 400 of them "gathered off the Yucatan Coast" of Mexico. In 1996, according to another report, a female was captured and found to be pregnant with hatched 300 pups inside her which would normally be born not all at once but over a prolonged period of time.

If you don't have the time or inclination or budget for come to St. Helena, there are many other places in this world where you can see or swim with whale sharks. Among them is the Atlanta Georgia Aquarium's Ocean Voyager exhibit built by The Home Depot. For $233.95 plus tax, non-members can swim with these giants and even get a t-shirt and souvenir photo. One other way to get a whale shark photo is to obtain a Philippines 100-peso bank note; the fish adorns the bill's back side.

Neither of those experiences can match this one. It was a rush.

I stroll back to the Mantis, stopping at the wharf side coffee shop for a cup of fine St Helena coffee and a breakfast sandwich while visiting with Jan, a Brit who is back on the island for a visit. She lived here a while back and worked as a prison guard. There were, she told me, nine prisoners.

I snapped a couple of pictures on the way back to the hotel to shower off the salt water. Here they are. 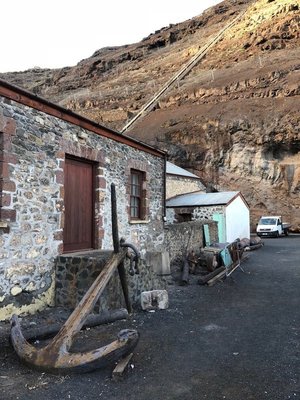 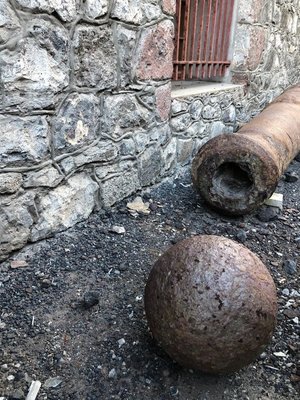 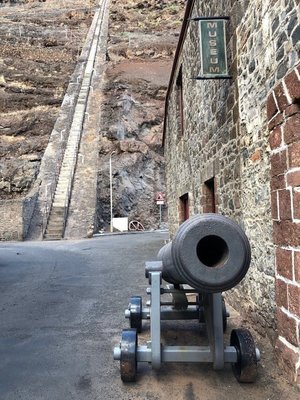 After a walk through Jamestown (I spotted a low license plate number) I met up again with Mike and Taylor. 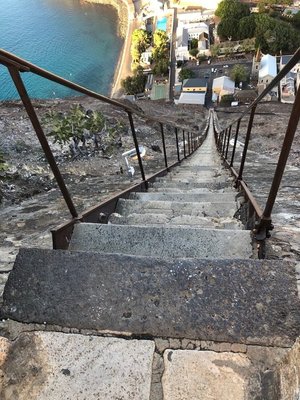 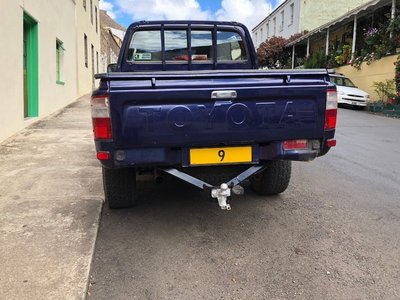 Our plan is to walk up Jacobs Ladder and watch the sunset at Rosies Bar and Grill. Jacobs Ladder was originally an 1800s era two-car funicular (Cable Car) used to transport supplies from Jamestown and the port up the hill to Ladder Hill Fort. The rails and cars were removed (termite damage) and, in their place, now reside 699 a-bit-to-high steps that we tourists can take to the "suburb" of Half Tree Hollow at the top of the hill. Were it not for Rosies Bar and Grill I surmise that no tourist would find the trek worthwhile. The record for climbing? Five minutes, 16.78 seconds. Taylor, Mike and I do it in a half hour or so, stopping first every 50 steps to rest, then every 40 steps to rest and finally every time we couldn't take another step. 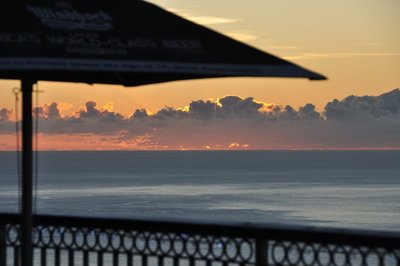 We opted for Dinner at Rosies and called a taxi to get us home. Our taxi driver is the Director of Security at the St Helena Airport--a part time gig since there is but one flight per week. She was a great conversationalist on the drive down and I already feel safe and secure when our departure date arrives six days from now.