At Leisure with Whale Sharks and an English Breakfast

Accompanied by Paul Cherrett, the three of us set out from James Bay "Passenger Terminal" after a bit of a delay caused by a shuttle boat drive shaft malfunction that tied up the boarding point for a while. This poor craft had been rushed into use when the regular shuttle boat broke down. Such is life on an island.

Aboard the inflatable Sea Hawk, the three of us head east around Sugar Loaf Point through three-foot swells and alternately cloudy skies. I am happy today to be in full wet suit as the temperature without sun combined with sea spray and wind makes my aging body know the cold too well. After a half hour or so Anthony spots the telltale shadow of a whale shark just beneath the surface only a split second before Paul saw the tail fin break the water's surface. 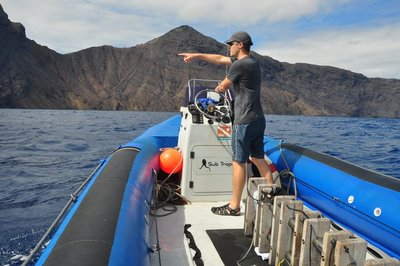 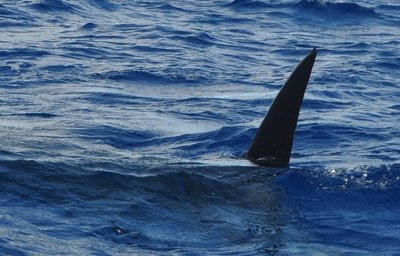 We powered down and I slipped over the side. Here the current was more pronounced than Monday and the fish was swimming at a less leisurely pace. The combination of those factors resulted in me wearing myself out keeping up. But the time I spent in the water with first one and then two whale sharks was again exhilarating and wonderful. Wide mouths first simply filter feeding and then turning toward me-making me think of Paul feeding-accompanied by their stowaway pilot fish hopping a ride make for a heartwarming and heartstopping few minutes.

But, as I said, I was soon worn out. I signaled for the boat (open palm waved from one side to the top of the head) and Paul motored the Sea Hawk over to my side, laid the rope ladder over the side and, after I handed over my mask, fins and snorkel, I-with a helping hand-climbed back aboard. Anthony had been in the water with me operating a very professional looking underwater camera. I am hoping for some wall-worthy photographs. 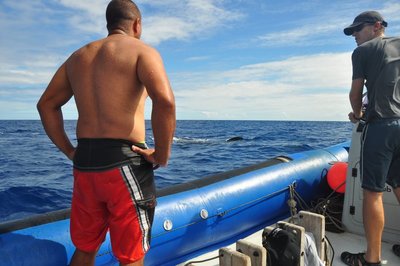 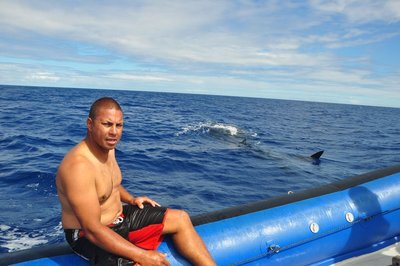 A swig of water calmed my stomach and rinsed my sea-water soaked mouth and I slipped my feet into the foot straps along the boat's floor and we began to motor back toward Jamestown. Along the way a pod of about 40 dolphins presented themselves 100 yards to starboard so we detoured over to join them. They rode our bow and frolicked alongside until they found us less interesting than we found them.

Dolphins-even baby ones-can swim at breakneck speed and leap high out of the water. They are beauty in motion and convey a family (pod) loyalty that makes them seem particularly appealing to humans.

Soon they raced away. We reversed course and landed at James Bay just in time to watch the overhead crane lift the broken shuttle boat out of the water where it could be-if parts could be found-repaired.

Into Anthony's truck, we drove a short distance beneath "The Castle", through the Archway and up Main Street, past the Tourist Office to The Inkwell Coffee and Bookshop. There, Anthony's mother and her fine crew cooked me a late English Breakfast consisting of two fried eggs, English bacon (more like fatty ham to us), sausages and beans accompanied by dark toast. Anthony and Paul, having enjoyed breakfast hours earlier, opted for "toasties," the British label for a toasted sandwich containing whatever you like. Mom's hot coffee topped off the meal during which Paul and Anthony and I shared stories of our lives and families and perspectives on the world.
Back to the Mantis, I rounded up the computer and headed to the patio to enjoy a glass of South African sauvignon blanc, a very young 2017 Granger Bay. The weather is quite comfortable-around 72-and has now turned cloudy with a brisk breeze. Frankly, I am happy to be ashore as this would make the sea both cold and bumpy.

Later, Taylor and Mike appear at the Mantis bar. We have a drink and a conversation and make plans for dinner. We will stroll across Main Street to Anne's. 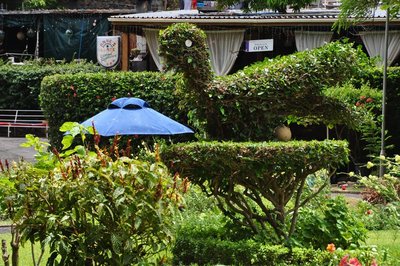 Anne's is a place with 20 or so tables but, by my observations, only a couple occupied at one time. There is tuna on the menu which, since this is prime tuna fishing grounds, fresh fish. I opted for stuffed tuna and it was quite good but perhaps overcooked. Taylors tuna steak, on the other hand, was perfectly done, and by her testimony, delicious. Mike opted for BBQ of a sort and didn't remark upon it one way or the other.

These two are remarkable company. Well traveled, knowledgable on many subjects, good with stories and quick smiles. I am fortunate to have made friends with them. As we ask the inevitable question one asks in places such as this, "What is your next adventure?" I advise them of my trip this summer to Cuiaba Brazil and The Panatal for a Jaguar river safari. Mike asks for more information; perhaps they will join. 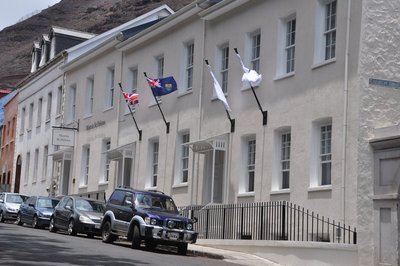 Back at the Mantis bar we have a nightcap and call it quits. Another memorable day-exciting in its own way-has passed in the mid-Atlantic.